Pierre’s Costumes is one of the world’s oldest full service costume and mascot manufacturers located in the heart of Old City Philadelphia.

Our stock of rental costumes is well over a million pieces, making us one of the largest costume shops in the country. We continue to maintain a full-service professional costume house, designing and manufacturing on the premises with our traditional tailoring techniques.

Pierre’s Costumes is one of the few places you can find such a range of costumes available to rent or purchase, mascots, hair-goods, make-up, and accessories all under our city block long roof.

Pierre’s Costumes is the culmination of Miller Costumier, Irvin Stern’s Carousel Costumes and Uniforms by Pierre among many others. 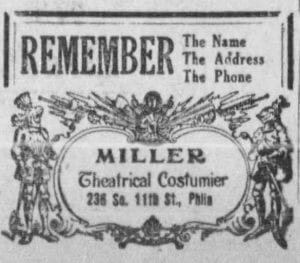 Miller Costumier, owned by Laura Miller, was established in 1876 after she retired from her stage career. Mrs. Miller was the first woman to own and operate a costume company in the United States. She was a member of high society, with her “comings and goings” being reported on the society pages, all while being an acting member of multiple theatre troupes. Her husband J. Horace Miller was nationally known for starring opposite of Julia Marlowe.

Irvin Stern’s Carousel Costumes was established in 1900. Irvin Stern was 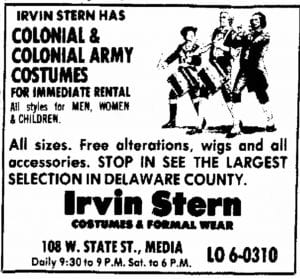 a preeminent tailor for Austria’s Emperor Franz Joseph before immigrating to the United States.  His first project after emigrating was to tailor for President William McKinley during the Spanish- American War. He started out renting formal wear, before he added an extensive stock of costumes.

Uniforms by Pierre began in the 1930’s when Nathan Stomel, struck out on his own after training under his father at Stomel Clothing Company, a men’s tailor shop. He began with manufacturing of civilian and medical uniforms. During WWII he incorporated military uniforms into his business.  In the 1940’s, he then transitioned to Pierre’s Uniforms and Costumes due to customer demand.